The Third Turn of the Executive Leader

It does not have to be all downhill from here. Besides, who says a downward slope is a bad thing?
True, once you gain momentum beyond the crest, reversing is almost impossible - and harmful to try.
But, if you intend new adventures, why should fear seize you now?
If an Executive Leader masters self — professional skill and personal character — they may have opportunity to enter Turn Two. If an Executive Leaders masters leadership of others within a set of organizational systems, they may have opportunity to enter Turn Three’s downward slope with unseen curves, in order to rise upward yet again.
Turn Three is where leadership into future value, succession, and legacy lie, moving away from an organization’s current activity to the downward slope of future value, as yet unknown. Rather than remaining at the foundation, the Third Turn Leader moves downward and outward to where the organization will need to arrive. 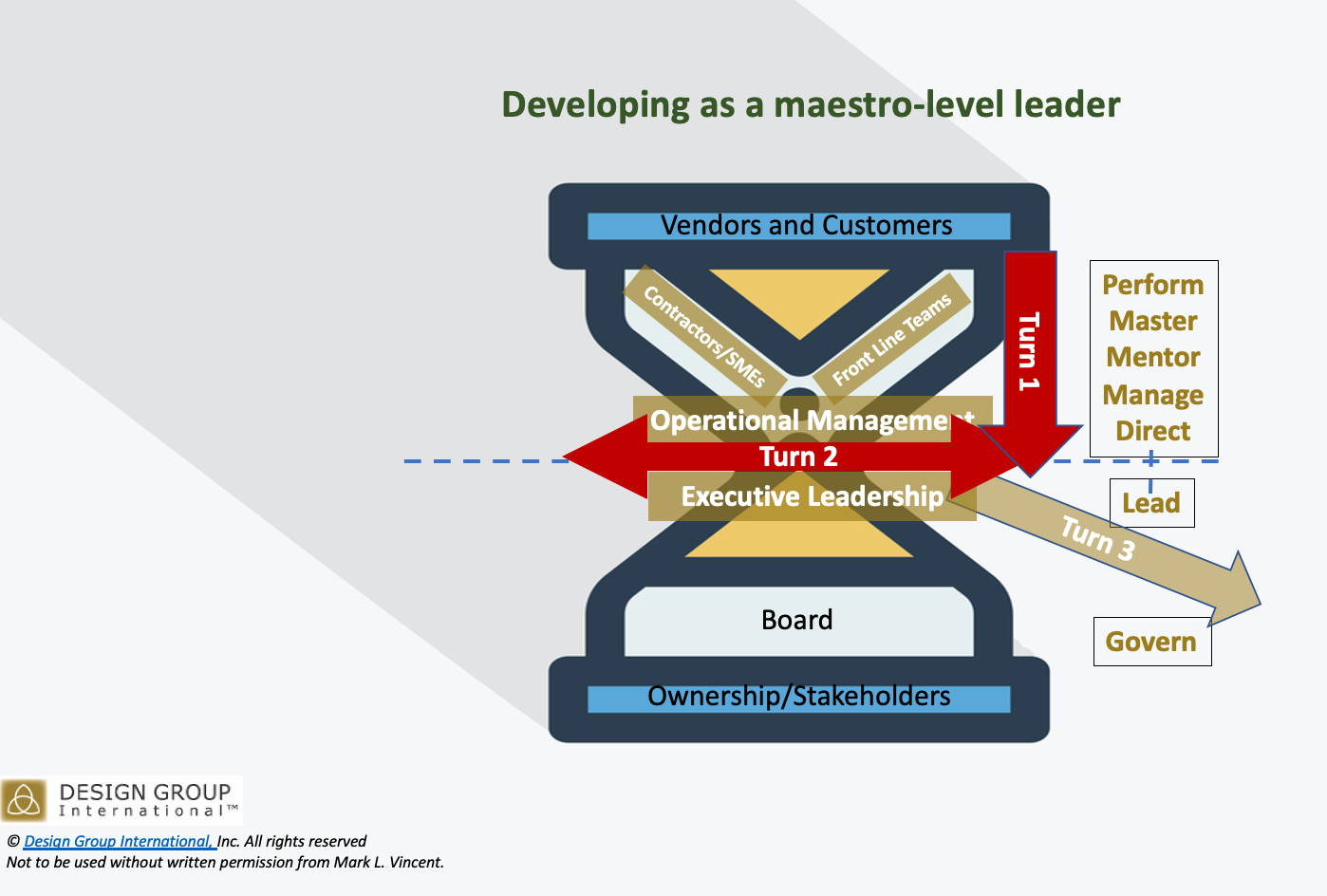 Maestro-level Leaders, a  Design Group International initiative,  identifies three turns in an Executive Leader’s development.*
This is NOT:
Each turn can be a wonderful place to spend a career. Each turn can be a place to fully and joyously inhabit - or a dead end. Each turn also has elements of the other two, and each of us can grow our capacities in all three. However, one of the turns is where we will live.
Repeating what has been written previously: each turn provides fulfillment in its own right. We can find people in each turn who are heroic in their leadership, and we can find people who are not figuring it out.
Turn Three is about leadership where legacy is concerned:
Turn Three is that of the Maestro or Maister — the wise master teacher.  While the Turn One Artisan is the excellent crafter of the previously established pattern, and the Turn Two Leader moves to the artistry of bringing their own vision to that craftsmanship, a successful Turn Three Maestro pioneers entirely new art forms so that new artists and artisans can emerge.
Please note that the arrow for Turn Three runs down and to the right, following the gravitational force of entropy until new discoveries, resources, and momentum can begin to exert upward and profitable pressure yet again. This is moving beyond the organization’s current moment to illuminate, develop, and grow its future value. A Turn Three Leader prepares the domain in which the organization will meaningfully contribute in the future.
There are several patterns among successful leaders who have Third-Turn potential.
The above real-life stories grow from the errant thinking that power is not to be released to others, as well as from denial that an end is coming. This is especially true when there is no plan for life beyond the Second Turn. Because there are so few compelling examples of winsome leadership growing from the person’s being (Turn Three) rather than their skills (Turn One) or position (Turn Two), it is difficult to map any journey into the unknown. The result is that future value is not achieved, successors are not named or cannot succeed, and legacy is tarnished. There is a difference between leading into future and unknown experiences and leading out of trying to age in place!
Learning brings a person through Turn One. Learning while doing what is right and good is the chief resource for the Turn Two Executive Leader. Learning while facing an unknown journey into future value that fosters the welfare of our collective grandchildren’s grandchildren is the chief job of the Turn Three Maestro-level Leader.
[Watch this brief video with Václav Havel as one example]
Who would you add to such a list as an example for your own aspiration?
Again, this is a progression of responsibility and possibility, a potentially aspired but not prescribed destination.  Everyone who lives into and beyond the Third Turn makes the world better for the rest of us. Our grandchildren’s grandchildren need more such leaders.
Today.
-mark l vincent
*Basic description of these three turns is on the Maestro-level leaders landing page, as well as on the Third Turn Podcast.