The First Turn of the Executive Leader 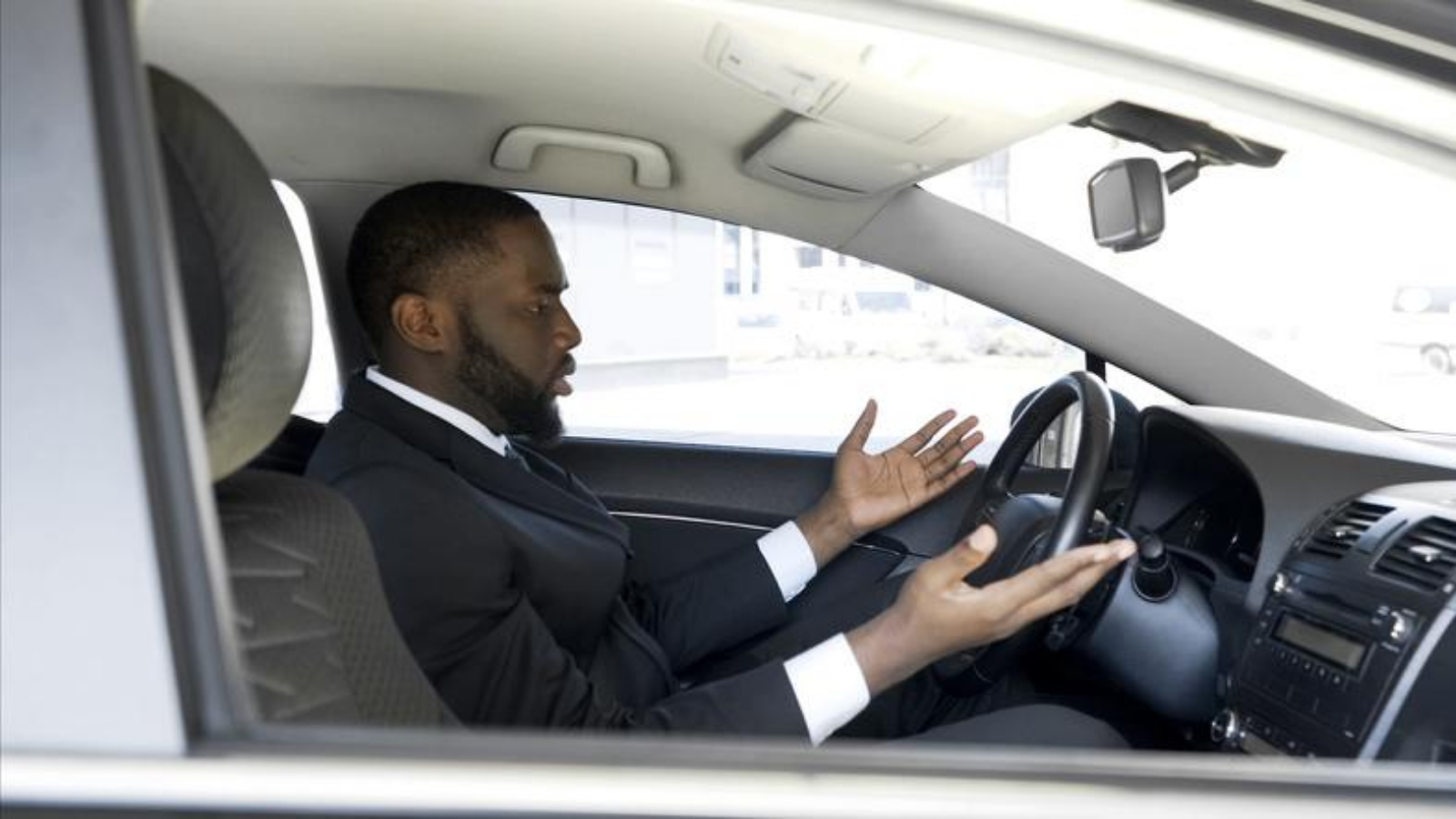 This photo makes me laugh. A well-groomed professional is ready to go places, but something isn’t working. The expected normal has failed. Perhaps it is an easy fix, and someone else’s technical assistance will get him on his way shortly. Or, maybe something about his car is completely broken, and he will have to adapt to his circumstance.  He is going to have to figure something out. When he does, he will be mobile again and wiser for it.

I  can’t think of a better expression of the executive leader’s ongoing development. Stuff breaks. Some fixes are technical, but the more one’s leadership grows, the more complex and adaptive the challenges become. They have to figure it out if there is going to be any forward momentum. Wisdom will accumulate.
Maestro-level Leaders, a  Design Group International initiative,  identifies three turns in an Executive Leader’s Development.
This is NOT:
All three turns are good. Each can provide its own fulfilling destination, and all three are capable of providing a challenging and excellent career journey. It is also possible for a person to get stuck in any one of them, requiring technical or adaptive help to bring further forward movement.
Basic description of these three turns is on the Maestro-level leaders landing page, as well as on the Third Turn Podcast, soon to be launched.
Here on the Third Turn Blog we are going a little deeper, considering each turn of the executive leader in turn (pun intended). So, Turn One.
Turn One is about the Leadership of Self:
Turn One can be likened to becoming an Artisan.  The Artisan is the excellent crafter — one who can follow previously established patterns well, demonstrating that they can be trusted not to break things. Their work is sought out because of its excellence. The First Turn Leader delivers on the promise.
Inside an organization, the developing First Turn Leader can find their journey mapped out thus: 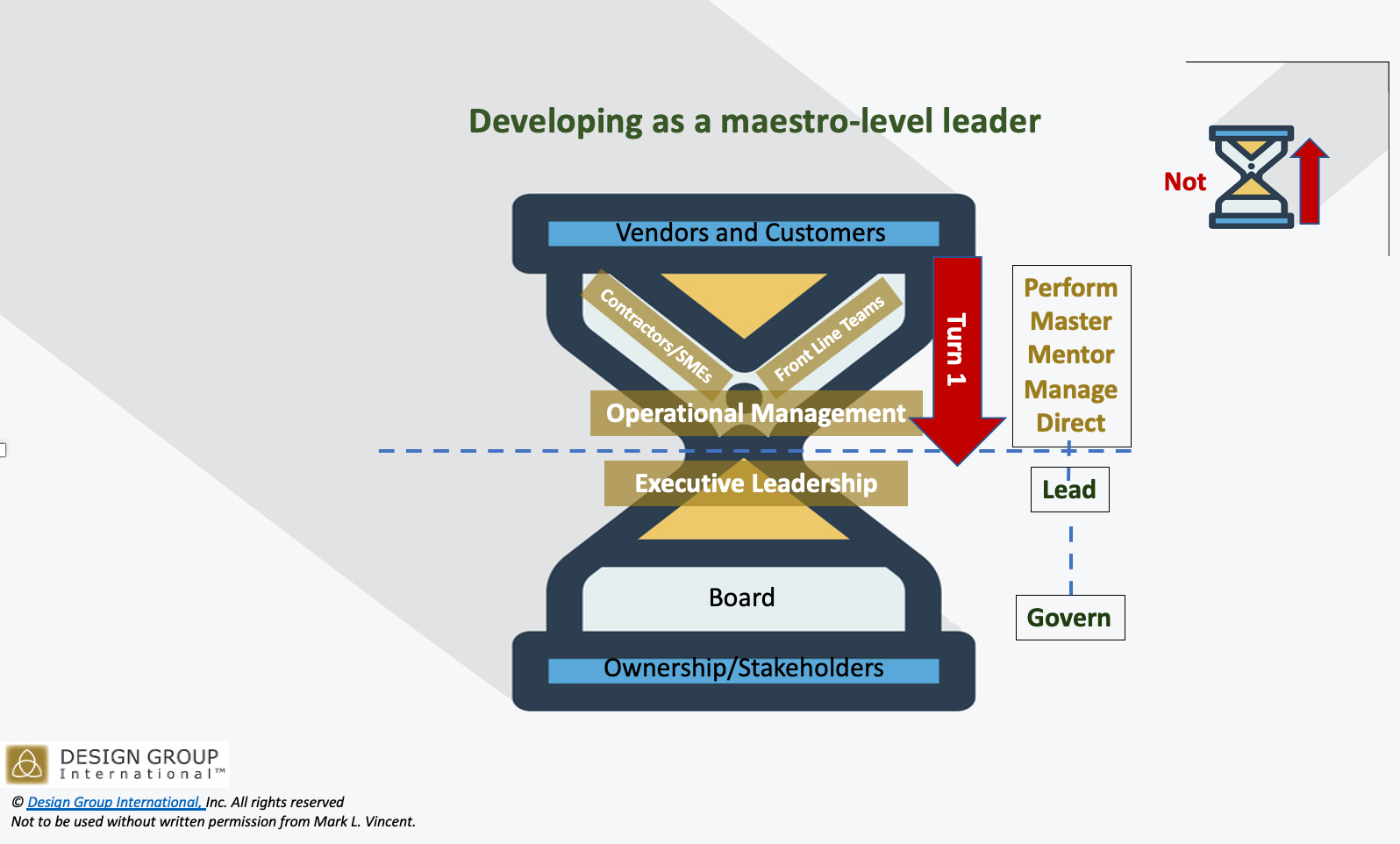 Please note that the arrow for Turn One runs downward. Rather than rising to the top of the organization, Turn One Leaders descend to the center of the organization.
For some reason we are enamored with the idea that a leader rises on the shoulders of others rather than others rising on theirs. This mistaken understanding promotes many to the helm of organizations because they were competent in performing their professional craft rather than because their leadership craft was well-developed. Perhaps they were promoted. Perhaps they felt they should strike out on their own. The result is mediocre and can lead to a quick flame-out, or worse, a failed dream. There is a difference between leading out of technical competence and leading out of learning competence!
[Watch this quick summary video from Michael Gerber’s the E-myth Revisited if you want some evidence]
A developing leader in Turn One learns to perform and then to master their craft. Finance? Sales? HR? Customer Service? Assembly? Design? Coding? Wherever their expertise is rising to be recognized, they have to manage themselves well enough to get the work done with something more than competence if they intend to grow as a leader. At this level of Mastery some will stop and have a satisfying life, enjoying the application of what they’ve learned, over and over, with recognized excellence that makes them valuable to the employer and to those they serve.  Others will grow beyond into mentoring others coming into their first turn, perhaps being invited to manage a team, perhaps directing a series of teams, eventually leading an entire operation.
Again, this is a progression of responsibility, not necessarily a desired destination - and certainly not for everyone. A person in the First Turn moves further away from the excellence of their starting skill set as they go deeper into leadership responsibility. If they want to grow as a leader, the ability to learn their craft needs to become the ability to learn to lead. As they do this, they leave big parts of their original craft behind in order to take up this new one.
Turn Two begins here.
-mark l vincent