Recent work with a client led to developing these thoughts on the act of scapegoating.

A natural part of managing unexpected (pervasive and adaptive) changes is pointing at others as the cause of anxiety that a person or a system feels. This is especially true in environments where people trade on their reputation for excellence, competence and accomplishments.

We should expect some scapegoating about the time it seems we hit our stride. 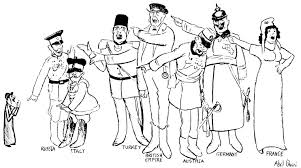 It is almost as if we start watching ourselves move at a new speed and end up tripping. We can't possibly succeed! Someone is to blame for this new way of working we don't yet fully understand or trust!

The trick is to discern whether:

When it is the first, it is often a person who made significant contributions in the past, but change now threatens their standing or competence. They either lead the charge to find a scapegoat (any scapegoat will do), or they become the scapegoat themselves.

When it is the system that is anxious, it is usually the newcomer, outsider or someone less well known that becomes the focus.

Scapegoating is often subconsciously expressed, rather than a conscious choice. When it becomes a concsious choice to remove the scapegoat, there is often a feeling that getting rid of them will make the problems go away. This is seldom the case. Because the real, underlying issues are not addressed, a new scapegoat is sought, and so on.

Additional background on organizational systems and scapegoating is found all over the internet. Here is one such resource: