Rut or Groove? A simple image for organizational and leadership development

If you search the web for images of "rut" or "groove" you get pretty much the same set of photos.  Look more closely and you will see a few different images in the results.  Where they 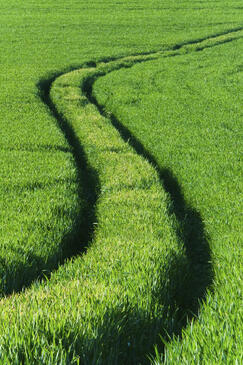 differ is that "rut" tends to produce more photos of desert tire tracks and "groove" tends to gather images of vinyl records and people dancing.

Actually, ruts and grooves are essentially the same physically while they could not be more different in effect. Rut means stuck. Groove implies movement...and with style.

Are you in a rut or a groove? Do you want to keep groovin' along? Or, almost inconcievably, do you want to stay slogged in?

The difference between a groove and a rut is:

1. Whether or not there is traction and momentum. Traction implies a grip--as in GET ONE! Grip comes from purpose, mission, vision and values that drive organizational culture and strategy. Grip provides the physical force to move. Even creeping along one can groove!

Once stuck in a rut, a rescue is needed, usually by a force or expertise beyond that which became stuck. Mercy is needed. Someone has to believe there is potential to resume the journey. They must overcome a lot of inertia-inertia often exerted by that which is stuck. Even though the unstuck one says they don't want to be, they often want to get unstuck without any effort on their part.

Moving along to the groove often brings its own strength to move through those boundaries that become a confining rut for others. Barriers can occasionally be removed. Sometimes they have to be plowed through. Traction and momentum are critical in either case.

Are you in forward motion or stuck?

If you use an alternative answer such as "we loop around," you are in a rut.

2. The difference between a boundary and a barrier. River banks guide the flow of a river's groove. Dams are barriers that stop the flow. Tracks on vinyl are grooves that allow for beautiful sound. Scratches and skips block the needle and make the beauty go away through grating noise and constant repetition.

Do the internal and external pressures you face stop or propel you?

3. The direction you face. Those who are rut-stuck look at their feet wondering where the traction has gone or why the mud is sucking at their boots. Grooving-moving implies facing forward, a specific destination in mind and confidence it will be reached. The past is drawn upon by the groovy because that is where momentum comes from, but the rutted person or organization looks to the past--whether success or wound--as the reason to stay where they are.

What best defines where your gaze is landing: past, present or prospect?

My favorite image of groove takes me back to childhood and matchbox car days. My cousins and I spent hours building tracks and holding races. The best configurations included a double-tracked propelling system operated by batteries that let us hold our own version of the Indy 500. If we placed them properly, the car's momentum would slow almost to a stop as it entered the little cave with its spinning wheels that jetted the car out the other side with renewed speed in the groove supplied by the track. Without it, the track became a rut, the car stopping and unable to move forward on its own.

So, an important question becomes what it is that keeps you and the organization you serve in its groove? How are you addressing:

If nothing else, draw on the mental picture of a track in the landscape. Picture yourself and your organization inside it. This is you and your work. Are you stuck and unable to move? Are you trying to carve a new and untried path beyond the current track that could become a new stuck place or a new groovin' flow? Or, are you in the groove and need to keep removing the barriers in order to maintain momentum?

'Scuse me, gotta go get my groove on!