Truth be told, even after several decades of Silicon Valley leading the way, and an incredible amount of research demonstrating the power of teams and an empowered work force, the majority of organizations are stuck in the authoritarian model of old (especially manufacturing), or even more stuck in the hyper-democratic models that tried to offer a correction in the last half of the 20th century (especially charities and denominational bodies).

Here are three diagrams photographed at a talk I recently gave on the subject: 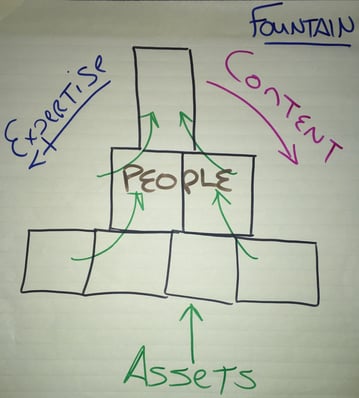 The first two diagrams are closed systems and the first one, what I label a Fountain, puts someone at the top who is to be perfect in all wisdom, power, knowledge and skill. They and their minions provide or produce the expertise that grants permission for people and teams downstream to perform. Capital pumps upward from investors, customers, clients or donors, providing facilities and wages (hopefully at a minimal cost to profits) for the people employed to do the work of production. Whatever is left after these expenses builds the wealth of the owner.

The problem with authoritarian and closed organizations like these is that resentment builds up over time. Leadership succession is often nothing more than an ouster. M&A activity usually leads to disappointment and demoralization, Workers begin to believe they are nothing more than the commodity that the owners believe they are. Loyalty to the mission is thrown away.

The second closed system might be labeled the Dwarf Star. The intention to move away from an autocratic and heierarchical structure has tried to open up the board room, using town halls conversations, adding review committees, or developing matrixed and cross-functional teams. Everything flows into the the center where everyone has a say. Very little mission effectiveness flows out.

In such a system everyone becomes an autocrat. One person's complaint results in stagnation, extra steps or even more structure, adding higher and higher personnel and capital costs to the equation of getting anything done.

Some Dwarf Star systems still produce something, but they do so in spite of the structure. Most of what does get done happens informally, outside the cumbersome processes and meetings, and among people who are quietly or even vocally in rebellion against the institutional bottleneck that they long ago tired of serving.

A key observation here, growing from our consulting work: many national non-profit organizations, especially associations and religious denominations have actually created a hybrid between the Fountain and the Dwarf Star, with the national bodies dispensing content and expertise that the local chapters and congregations quickly disregard as they are too busy with their own efforts. The response is to create new Dwarf Star structures where hired experts can dispense even more wisdom that disappears unused.

J. David Schmidt's 1996 seminal study Choosing to Live is a key resource that pointed to an open system - what might be called a Membrane - pictured in the third diagram - what has repeatedly been demonstrated

as the most effective and responsive of organizational models. Here the top leadership level establishes boundaries within which to govern toward effectively accomplishing a mission. Expertise, content, resources, capital and personnel are what makes this happen and are empowered to do so. Where they come from or where they are housed doesn't matter. Neither does the length of engagement. Leaders are needed, but within limits and not necessarily fixed permanently in place.

A key argument I repeatedly encounter about why closed systems are superior and should be preserved is the security they offer. They are viewed as more stable. REALLY? Millions of displaced workers who looked to all-wise leaders and democratic systems to provide them lifetime work have repeatedly wished it were so as the brands they served melted away, their benefits were cut, their pensions were lost and their wages fell. Closed systems simply are not nimble enough to thrive beyond the founders of the Fountains and the current bureaucrats of the Dwarf Stars.

So what might practically be done? One key insight is stop distinguishing between money spent on the workforce and money spent on contractors. This is a false dichotomy in an age where everyone is a contractor and no-one is indentured to the company. The pool of money available for staffing -whether internal or external - is better evaluated in light of mission effectiveness than it is assuming that a W-2 or a 1099 relationship is somehow more superior to the other.

Closed vs. Open is at the heart of the Uber fight and other disruptive technologies entering and deeply affecting the marketplace. Closed vs Open also rests underneath the difference between totalitarian governments or deeply fundamentalistic religion and diverse and flourishing societies. I struggle to imagine a scenario where closed systems win and the world is ultimately better for those who will come after us.

Consider me armed with a can opener and ready to apply it.