Notes on a Resource: Eleven Rings-the soul of success

Eleven Rings: The Soul of Success 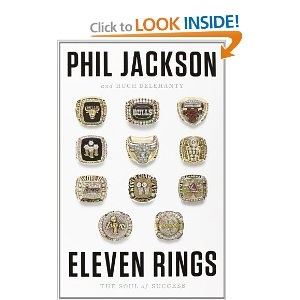 it, finding ways to help the egos of basketball stars integrate into it, as well as inviting counsel from others as teams he coached took their next steps (jumps?) in that pre-determined direction. Originality was not what brought Mr. Jackson eleven rings. Rather, it was the modulated and varied ways he found to apply what was already proven. Jackson demonstrates his use of eastern spirituality, imitating the original with his subtle contributions.

Accessibility of the material = 4. The book follows the course of Jackson's career as in other works, including ones he wrote. Here the story is the foil for showing how success was achieved. If one already knows the story of all those championships in NYC, Chicago and L.A., they can easily turn to the part of the saga of interest to them. If one is digging in greater detail, the substantial index is a useful tool. In the end, however, Jackson's approach is simple and repeated. One must calmly work with what they have in order to move toward what can be. He writes, "Leadership is not about forcing your will on others. It's about mastering the art of letting go."  (p.309).

Mix of theory and practice = 3. It might be better to title this section the mix of spiritual and physical, in which case we would rank it higher. The Xs and Os of the Triangle System are absent here, as well as any base Leadership Theory Jackson has drawn upon or evolved. This book is a chronicle of his success, an inspirational tour of repeatedly figuring it out. We spend a lot of time in the lights and in the crowd's roar, and just a little time on the methods of working through the grind, and then doing it again. Clearly the purpose of this book was inspiration, not perspiration. That purpose is achieved.

Look and feel = 4. The photograph of all eleven rings on the cover is an effective statement about one's lifelong and repeated accomplishment--a rare tale that can appeal to even a non-basketball fan. The construction-orange spine makes no sense, however, clashing with the gold on the back cover, and reducing the sparkle of all those rings. The typeface is easy on the eyes and the photographs are just enough.

Engagement of the audience = 4. Anytime a writer uses a story about one medium as a means to illustrate a second, the challenge is to appeal to both audiences and not alienate them. Given that Jackson is a lifelong spiritual explorer and chooses not to leave his "soul" out of what he writes, the danger of three audiences showing disinterest is certainly present. Jackson (and Hugh Delehanty, the co-author) integrate these elements well, not digging too deep into basketball esoterics, not departing too far from the story at any time, and not getting too preachy about Jackson's eclectic spiritual practices.

Post by Mark L. Vincent
June 6, 2014
I walk alongside leaders, listening to understand their challenges, and helping them lead healthy organizations that flourish.