All the mugs have breasts

Third Turn Leaders facing into the mist of the future do not get to choose what appears in front of them. Future value, succession, and legacy will be what they make of it in an ever-changing context. They must figure out how they continue to bring a guiding mission and values -- as a person and as one responsible for an enterprise. It is a dance with intricate, ever-moving steps. Here is an example…. (Warning: adult themes and a lot of vulnerability)

"You are a radical moderate" is a description given to me over the years.

Is radical moderate-ness even possible in such a polarized era? I've chosen to consider this assigned description to mean that I am perceived as one utterly committed to finding a way forward beyond apparent tensions, polarizations, and conflicts. If so, guilty as charged!

This commitment can place a person at seeming odds with everything - especially as cultural tides shift and become more polarized. It can mean never leaving the dance floor as the world keeps spinning and changing tempo. Radical moderation is a more complicated and nuanced way to live than choosing an ideology and then building fortifications around it because of an adrenaline-pumping assumption that one is at war with seemingly opposed world views.

A for instance that gives rise to this reflection

My wife, Patricia, and I were traveling, and we needed a place to hop on work-related calls. We sought out a co-working space in the area and were pleased to find one self-described as owned by women and planned as a space for women. Men-folk were welcome also. I expected a softer form of decoration, furniture texture and color, and a higher quality of coffee and tea. I was not disappointed.

And then...just a single choice of a coffee mug. All the mugs had breasts. 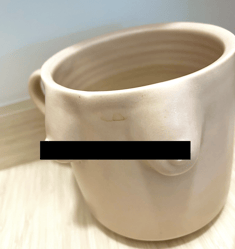 My coming of age was at the peak of the Playboy and Penthouse competition. At that time, unshielded covers siren-sang at my 13-year-old pubescence every time I went into 7-Eleven or a mall bookstore. The sexual emancipation of women was underway. Women were no longer shut away in domesticity; shameless and zipless sensuality was now heralded as right and good.

Women became more objectified than ever, it seemed. Our culture brimmed with overt sexuality - everything from beer commercials to fashion expectations to the hottest music trends to the leering camera ogling in so many movies of the'70s and '80s. Women no longer needed to put up with being the inferior sex. But, now being equal, they had better put out!

It became a battle against this constant and not asked for titillation* to continue seeing each woman in my life as a dignity-possessing person and not as an object of desire - to see women as friends, colleagues, and people from whom I could learn rather than treat them as consumables. Even more, I fought to find ways to be an ally and supportive without treating women as weaker than me. Even more, I tried to live out my commitment by not participating in locker room banter, fostering equalizing policy in organizations that previously had been male bastions, and continually monitoring where my eyes went and what my tongue said.

But the world changed recently, especially as people long subject to mistreatment lay claim to and repurpose what was previously derisive and derogatory. My first awareness of this change was when the "N" word became a label African American youth began to use for each other. It was their word now and with their meaning—something empowering rather than enslaving.

And now, with these mugs, here was a new one. In a flash, I was forced into the dance of intricacy again. The women owners of this work co-op were taking their boobs back. Men like me cannot treat their womanhood as objects of male desire, and I do not want to. However, the women owners can make a statement about their gender and bodies. I have to deal with them now, and they choose not to have to deal with me.

I realized all this as I simultaneously and frantically looked for other mug options. There were none. I could intellectualize it, but my body was thirteen years old again, torn between staring and looking elsewhere --desperate not to be observed by a woman with one of these mugs in my hand and not wanting to be yet another lecherous male. Another instant realization was that--as a left-hander--those ceramic tatas would be in my face every time I took a sip.

Yes, I could have foregone any coffee at all, but why? As protest over what?

I closed my eyes, took a deep breath, and let it out. And then, in honor of my grandmas, my mother, my wives and daughters, my esteemed colleagues, my sister and aunts, and my granddaughters who will come of age all too soon, I stepped more fully and bravely into this new world.

The coffee was quite good. My radical moderation was restored. I am still dancing.

* I've often wondered who will file a class-action lawsuit against the advertising industry because of the continuous sexual harassment and grooming perpetrated on my generation's young women and men.

Post by Mark L. Vincent
September 8, 2022
I walk alongside leaders, listening to understand their challenges, and helping them lead healthy organizations that flourish. 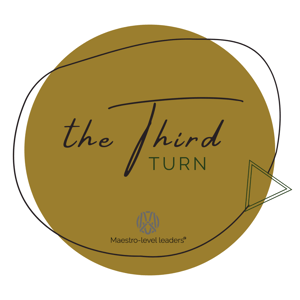