A Bit About Logos

Whether established quickly and intuitively or from a great deal of deliberation, a useful logo lands in the conscious and unconscious. It does this because it somehow encapsulates the mission, one difficult to distinguish from a brand promise. Whether or not that logo is loved, it is working if it is viscerally understood.
Sadly, the conscious, thoughtful creation of a visual rendering (logo) at the genesis of an initiative is often not transferred to those who join the effort later. This is consistent with the difficulty of employees, board members, and C-suite executives in expressing their organization's mission, vision, and values. They know them when they see them. They might know how to retrieve them. But they are not engrained enough to articulate, let alone use well.
As Maestro-level leaders launches, I'd like to use our logo as an example and record its genesis, so we can draw on it over time.  We are not asking whether everyone loves it nearly as much as whether they are able to recognize it. We want to be able to use it as a way to remember the Three Turns of the Executive Leader.
That journey is subtly expressed in the logo, but it is sorta fun to explain.
Those who look closely at the logo usually identify a human figure. They describe what they see differently, however, as there are at least three ways to render that figure.
Turn One -  Leadership of Self

Turn One is the discovery and filling out of the potential of one's gifts, character, and capacities. A  growing Turn One leader enters their vocation and learns to do excellent work as an Artisan. In this Turn, the leader rises vertically  and fills out their space. Here, the figure in the logo evokes Da Vinci's Vetruvian Man. The Third Turn leader says, "Look at me!"
Turn Two - Leadership of an Organization and of Others 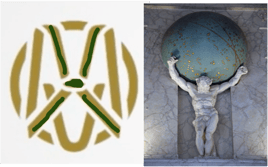 Turn Two makes it possible for others to live into their potential within an organization. An effective Turn Two leader is an Artist, bringing vision to the vocation that attracts artisans who want to do excellent work. In this Turn, the Leader stoops to undergird the space that others need to fill. Here, the figure in the logo evokes the Titan, Atlas, holding up the world. The Turn Two leader says, "Look at this!"
Turn Three - Leadership toward Future Value

Turn Three is the movement upward and outward toward the sustainable flourishing of the world beyond one's lifetime. An accomplished Third Turn Leader is a Maestro, developing future value and possibilities for the grandchildren's grandchildren. In this Turn, the leader spreads upward and outward in order to point to potential and future gifts. Here the figure in the logo evokes the universal gesture of exultant wonder, what some call the YES! The Turn Three Leader says, "Look at that!"
If you want to better understand the Three Turns of the executive leader and to consider where you are and what might come next, you can follow the links that head each section and dig more deeply. The point of this post, however, is to consider whether a logo conveys a mission and promise and even more whether others can catch it and effectively pass it along.
How well can you articulate the mission and values of your organization? How readily do you recognize it within the logo and brand usage? How readily is it passed along to those who join further down the road?  How important is this to you and those with whom you work?
-mark l vincent
Are you a Third Turn leader in search of traveling companions? Our next Maestro-level leaders cohort begins at the end of January.  You can learn more at www.maestrolevelleaders.com